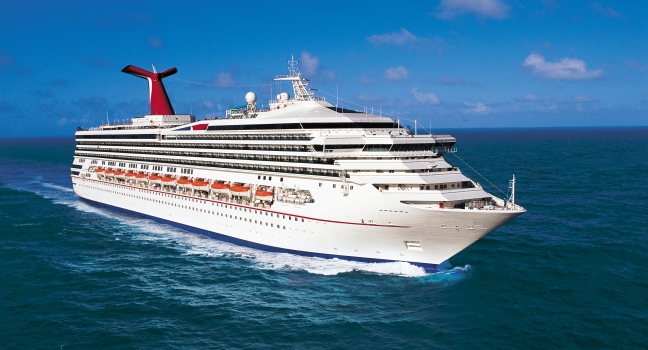 See such scenic wonders as the Bay of Fundy in Saint John and the sights of Halifax, Nova Scotia as well as the historic New England cities of Boston and Portland.

All shipboard meals are included

Port of Call #2: Portland, ME
Walk Maine's largest city and follow in the footsteps of your fellow seafarers, past and present, on a Carnival cruise to Portland. Perched on green bluffs overlooking Casco Bay, Portland is a place where lobstermen still ply the briny Maine seas and wooden fishing boats chug through the harbor. Portland cruises pull into a modern-day seaport of sleek high-rises towering over a revitalized Old Port area, alive with brewpubs, restaurants, and shops.

Port of Call #3: Saint John, NB
Cruises to Canada offer some of the most dramatic scenes Mother Nature has to offer. Sail with Carnival for some of the best views of the Canadian coastline on a cruise to Saint John. Nestled between nature parks and the powerful currents of the Bay of Fundy, Saint John is the province of New Brunswick's largest city and its most important port. Set out from your Carnival cruise into Downtown, with its Victorian-era architecture and bustling central market. Your ship anchors in the Bay of Fundy, where you'll spot seals and shorebirds from the trail, your kayak, or from an observation tower. Whether you take to the trails for a hike or just take some time off in town, your cruise to Saint John is bound to be one you won't soon forget.

Port of Call #4: Halifax, NS
Your first look at Halifax, Nova Scotia is from across the enormous natural harbor that also hosts the verdant George's Island. Ships have arrived at this key Atlantic seaport just like this for centuries, including both the million immigrants who passed through in the 1900s, as well as the Halifax salvage boats recovering wreckage from the Titanic. Besides a modern city abuzz with museums and shops, you'll find a massive fort overlooking the waterfront and idyllic villages for postcard-perfect nature walks.

Carnival Sunrise (formerly the Carnival Triumph) enhancements include the redesign of two luxurious Captainï¿½s Suites adjacent to the navigational bridge offering floor-to-ceiling windows and extended balcony grand suites. All of the shipï¿½s staterooms will be updated to offer island-inspired interiors with bright colors and soothing pastels inspired by the lineï¿½s Caribbean itineraries. Other new features will include:

Java Blue Cafï¿½: offering lattes, cappuccinos and other caffeinated favorites, as well as ï¿½spikedï¿½ coffees made with liqueurs, and decadent confections.

The Chefï¿½s Table: a new multi-course dining experience hosted in a special glass-enclosed venue in the forward dining room.

Cloud 9 Spa and More, expanded facilities for kids and teens and

Dining Times for Main Dining Room:
Dinner:
1st Seating - 6:00pm
2nd Seating - 8:15pm
Passengers can also choose the Your Time Dining option. This allows passengers to go to the Main Dining Room between the hours of 5:45pm and 9:30pm. When they arrive at the Dining Room, they will be asked for the number in their party and if a table is available, they will be seated right away. If there is no table available, the passengers will be given a buzzer so that the wait-staff can buzz them when a table opens up.

On Board Gratuities:
Carnival automatically charges $13.99 per person/per day for dining and stateroom services to your onboard account.

Guests under 16 years of age are not permitted in the spa and guests under the age of 18 are not permitted in the casino.
Carnival Cruise Line prohibits smoking within staterooms and balconies fleet wide.
Smoking will continue to be allowed in designated open deck areas, as well as night clubs and certain areas within the casino and casino bar.
Guests who smoke in their staterooms or on their balconies will be assessed a $250 cleaning and refreshing fee on their Sail & Sign shipboard account.

Sweaters, lightweight jackets, raincoats, comfortable shoes, and a camera are suggested for this cruise.

Travel Protection is recommended through The National Tour Association's (NTA) Travel Protection Plan administered by AON Affinity.
For more information or to purchase, call 800-388-1470 or log onto: nta.aontravelprotect.com
Starr's Tour Operator location # is 306035.

$300 per person deposit is due at time of booking to secure a cabin.

"Government fees & taxes, non-commissionable fees and port expenses" may include any and all fees, charges, tolls & taxes imposed by US and/or foreign/governmental or quasi-governmental authorities including, but not limited to, SU Customs fees, head taxes, dockage fees, wharfage fees, inspection fees, pilotage, air taxes, hotel or VAT taxes incurred as part of a land tour, immigration and naturalization fees, and Internal Revenue Service fees, whether assessed on a per passenger, per berth, per ton or per vessel basis. In case of per ton or per vessel assessments, those assessments will be spread over the passenger capacity of the ship. Government Fees & Taxes are subject to change and the cruise line reserves the right to collect any increases in effect at the time of sailing even if the fare has already been paid in full. "Fuel Supplement" shall mean any additional charge to defray a portion of the cruise line's fuel cost. The amount of fuel supplements are subject to change.

-Proof of Citizenship Requirement: PASSPORT
Your passport must be valid for at least six months beyond the period of your stay.

Please remember that proper travel documentation is required at embarkation and throughout the cruise. Carnival is sorry to say, if you do not have proper documentation, you will not be allowed on board. This also means Carnival will not be providing a refund.