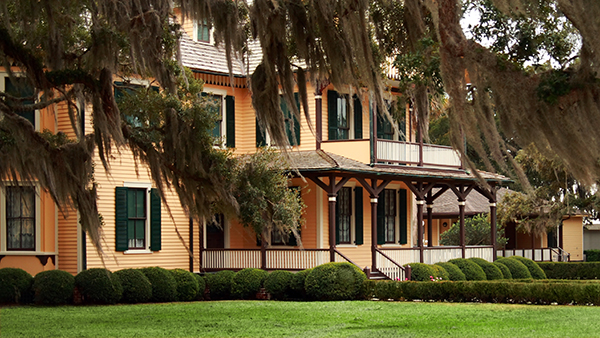 Discover the southern charm and hospitality of three coastal cities filled with rich history and beauty.

Day 5:
Breakfast at hotel
Guided tour of St. Augustine
Walking tour of the Mission of Nombre de Dios
Tour the Lightner Museum
Free time on own on St. George Street
Tour and tasting at San Sebastian Winery
Return to hotel
Dinner at the Reef Restaurant


Day 6:
Breakfast at hotel
Check out
Travel to Savannah, GA
Lunch on own
Old Town Trolley tour of Savannah with admission to the Massie Heritage Center
Free time on own to enjoy Savannah
One overnight at the Courtyard Savannah
Dinner on own

Day 7:
Breakfast at hotel
Check out
Travel to Charleston, SC
Free time on own for shopping or sightseeing in Charleston
Lunch on own in Charleston
Travel to Fayetteville, NC
One overnight at Fairfield Inn
Dinner on own

Day 8:
Breakfast at hotel
Check out
Travel home
Lunch on own en route

Every Starr trip includes deluxe motorcoach transportation and overnight accommodations.
Jekyll Island Tram Tour
Tram tours of the Jekyll Island Club Historic District begin at the Island History Center on Stable Road. From 1886 to 1942 this area served as the winter retreat for America's wealthiest families - Rockefeller, Crane, Goodyear and Morgan. Thirty-three of the original buildings still stand with many mansion-sized "cottages" on the tour. We will tour two of these historical buildings. After the tour, you will have an opportunity to visit the museum exhibits and view a video presentation that reveals the fascinating story of Jekyll Island-from its earliest inhabitants, across its fabled Club Era, to its wondrous restoration programs today. There will also be time to visit the gift shop.

Tour of St. Simon's Island
Our 2 hour tour of St. Simon's Island will include a view of Fort Frederica, built by James Edward Oglethorpe in 1736. Also, a trip to the island wouldn't be complete without a stop at Christ Church where John & Charles Wesley held church services here under the oak trees for the early settlers. Eugenia Price has captured the spirit of these islands in her historical novels about the Golden Isles. She made her home here & is buried in Christ Church yard. See the fabulous "Avenue of Oaks" on former Retreat Plantation, now Sea Island Golf Club. During your free time at the Village, you will be able to visit the St. Simon's Island Lighthouse at your leisure.

Hofwyl-Broadfield Plantation
This beautiful plantation represents the history and culture of Georgia's rice coast. In the early 1800s, William Brailsford of Charleston carved a rice plantation from marshes along the Altamaha River. The plantation and its inhabitants were part of the genteel low country society that developed during the antebellum period.

A museum features silver from the family collection and a model of Hofwyl-Broadfield during its heyday. A brief film on the plantation's history is shown before visitors walk a short trail to the antebellum home. A guided tour allows visitors to see the home as Ophelia kept it with family heirlooms, 18th and 19th century furniture, and Cantonese China.

Dinner & Performance
Enjoy dinner and then, during dessert, meet Henry Flagler and his three wives during a theatrical production of "The Lives and Wives of Henry Flagler." These monologues are sure to give you an insight into the man that brought commerce and visitors alike to St. Augustine.

Guided Tour of St. Augustine
Begin with a Narrated Step-On Tour of the Nation's Oldest City aboard the comfort your motorcoach. Over 430 years of history are highlighted as you travel through ancient streets to view buildings dating to the 1700s. Discover the roots of the Timucuan Indians that were native to the North Florida coast and their contributions to the Spanish settlers. Learn of several failed attempts to take over the colony and how the colonists struggled against fire, disease, and threats from neighboring colonies. See the vast British influence on architecture. During their short 20 year control of the area, their alterations are still in place today. Enjoy the Flagler Era. Henry Flagler, the Father of Florida Tourism, made St. Augustine a winter destination for wealthy Northerners in the late 1800s. You will see two of his grand hotels and enjoy a guided tour inside the Flagler Memorial Presbyterian Church, built in memory of Flagler's daughter, Jenny Louise.

Legacy Tour of Flagler College
Legacy Tours of Flagler College highlight the architectural heritage of the former Hotel Ponce de Leon, listed as a National Historic Landmark. Built by Henry Flagler in 1887, the Ponce was one of the most exclusive resorts of its day. Tours begin in the Rotunda as you gaze up to an 80-foot domed ceiling supported in part by eight ornately carved oak caryatids, robed women copied from the temple of Diana in Geece. Visit the Dining Hall, where 79 Louis Comfort Tiffany's stained glass windows are displayed. Then onto the Flagler Room, originally the hotel's Grand Parlor, visitors view Tiffany Austrian crystal chandeliers, a massive onyx Thomas Edison clock - one of the first ever to be used in a public building - and a historical photo gallery of the Flagler family.

Lightner Museum
Tour the Lightner Museum. Once the grand "Good Time" Hotel Alcazar, this museum houses one of the finest collections of turn of the century art and collectibles. Otto C. Lightner, founder of Hobbies Magazine, had a unique hobby; he collected other people's collections. You will find them on display spread over three floors throughout the former hotel.

The museum is handicapped and wheelchair accessible.

San Sebastian Winery
A visit to the San Sebastian Winery will take you on the interesting journey of the wine making process. After an audio-visual presentation, tour the 18,000 square foot wine production facility. Pass over the bottling line and the Sparkling Wine production area. Learn the important details of the 5,000 gallon stainless steel tanks where wine is fermented and stored prior to bottling. At the wine tasting, taste, savor and enjoy a selection of San Sebastian Premium Table Wines. The Wine Shop offers a variety of unique wine accessories and gift items.

Old Town Trolley Tour of Savannah
Old Town Trolley Tours is the best way to see the city of Savannah.
It's the extraordinary architecture, lush botanicals, and captivating stories of this historic, coastal city that make for an unforgettable vacation experience.
Your friendly conductor will narrate the tour with a fascinating and fun mix of trivia and humorous stories.

Tour includes On & Off Boarding Privileges at all designated stops.

Massie Heritage Museum
The Massie Heritage Center is an excellent place to learn about the history of Savannah, its beautiful city plan and architecture, and the people who have lived here for centuries.

Massie School opened in 1856 as Savannah's first free public school, operating continuously except for its use as a Union hospital during the Civil War Federal occupation of the city and as a Freedmen's school during Reconstruction.
Closed as a regular school in 1974, Massie reopened in 1977 as a teaching museum for history and architecture with programs attracting visitors of all ages. A local school system property, the site hosts exhibitions and programs throughout the year.

Conveniently located off of I-95, the Fairfield Inn Fayetteville features an outdoor pool and fitness room.

The hotel offers complimentary continental breakfast each morning. Nearby restaurants include Cracker Barrel and Ruby Tuesday.

Rooms are Oceanside; partial view of the water or some views may be blocked by dunes.
Each room shares a walkway (No private balconies or patios)
124 beautifully appointed rooms and suites.
Hotel has 2 floors with elevator access
All rooms offer coffee maker, hair dryer, micro-refrigerator, iron and ironing board.

The hotel does not have a full service restaurant, but there are restaurants within 1 mile of the hotel.

The Holiday Inn Express St. Augustine North is centrally located to all of the sites in the charming historic district of St. Augustine.

The hotel features an indoor pool and Fitness Center.

Handicap accessible rooms are available upon request. Ice and soda machines are located on every floor. Church directory is at the front desk. Several restaurants are within walking distance (The Cannery Restaurant is located across the street)

No charge for refrigerator or cots. Can only have a cot with one bed in room.