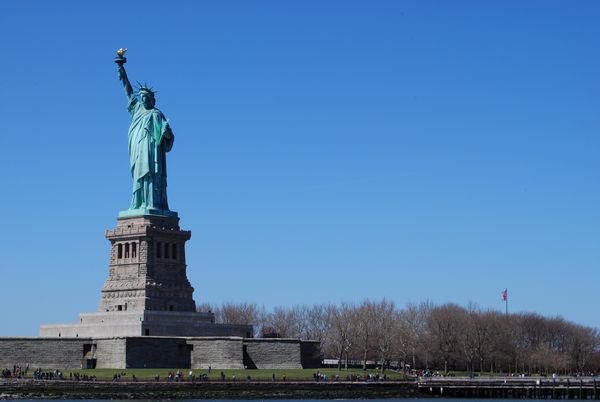 Close your eyes and imagine your ancestors as your ferry cruises you to both Ellis and Liberty Islands and to see the famous statue up close.

Lunch on own--food concession stands on both islands

Statue of Liberty:
Located on 12-acre Liberty Island in New York Harbor, the Statue of Liberty was a gift of international friendship from the people of France and is one of the most universal symbols of political freedom and democracy.

Ellis Island National Monument:
Visit Ellis Island's brand new "The Peopling of America Center" exhibit!
At the Museum of Immigration, visitors can follow the foot-steps of their ancestors upon arrival in America. The Island of Tears is a poignant film that documents the voyage to America.

You can take your own food to the island, but large coolers will not be permitted past security.

Our ferry departs from Liberty State Park every 30-45 minutes.

Starr purchases Group Flex tickets in bulk. A Monument Pass or crown access is not included with a Flex Ticket.

-Starr purchases Group Flex tickets in bulk. A Monument Pass or crown access is not included with a Flex Ticket. These passes are not able to be added in combination with the Flex Ticket.

Please keep in mind that you will be going through a mandatory airport grade security screening prior to boarding the vessel.

Prohibited Items:
All weapons, including firearms, knives, mace etc., any dangerous items, and any "dual-use" items that could be dangerous are strictly prohibited in the park and on the ferry system.
Large packages, backpacks, suitcases, carry-on luggage and other large parcels will not be permitted on the ferry systems or at Liberty and Ellis Islands.

All vessels are wheelchair accessible. Statue Cruise does not have wheelchairs available for visitors.

The grounds of Liberty Island as well as the Information Center, Concessions and all Security Screening Areas are wheelchair accessible.