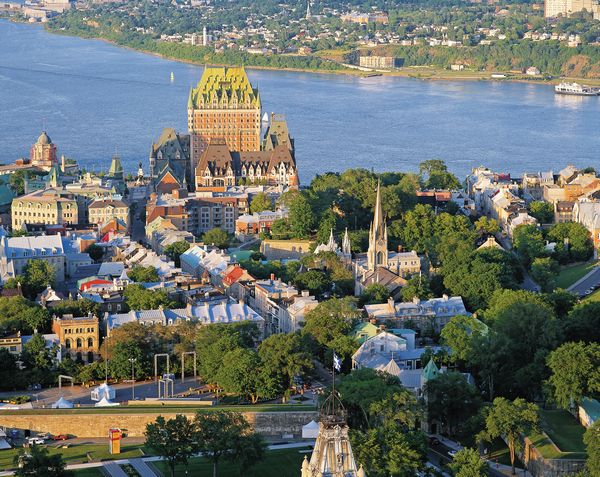 Explore the rich culture and heritage of the historic architecture, ancient churches, beautiful parklands, and picturesque villages on this vacation that brings together the new world with old world charm.

Day 2:
Breakfast on own
Three-hour guided sightseeing tour of Montreal
Visit Notre-Dame Basilica
Free time on own in Montreal
Dinner on own
Visit Casino de Montreal

Day 3:
Breakfast on own
Check out
Travel to Quebec City
Lunch on own
2 1/2 hour guided sightseeing tour of Quebec City
Two overnights at Hilton Quebec
Dinner on own

Day 4
Breakfast on own
Travel to Beaupre, Quebec
Visit Shrine of St. Anne de Beaupre
Visit Montmorency Falls
Return to Quebec City
Lunch on own
Free time on own in Quebec City
Dinner on own

Day 5:
Breakfast on own
Check out and stop at US/Canadian border to clear customs
Travel to Lake George, NY
Lunch on own
One overnight at the Clarion Hotel
Dinner on own in Lake George Village

Day 6:
Breakfast at hotel
Check out and travel to Albany, NY
Tour NY State Capitol
Lunch on own
Travel home

Notre-Dame Basilica
A masterpiece of Gothic Revival architecture, Notre-Dame Basilica was built between 1824 and 1829. The magnificent interior in wood and the boldly modern design of the Notre-Dame-du-Sacre-Coeur Chapel, captivates hundreds of thousands of visitors each year. Paintings, sculptures, and stained-glass windows illustrate biblical passages as well as 350 years of parish history.

Sainte Anne de Beaupre
The Basilica of Sainte-Anne-de-Beaupre is a basilica set along the Saint Lawrence River in Quebec, 19 miles east of Quebec City.

Paintings, mosaics, stained glass windows, stone and wooden sculptures reveal the extraordinary beauty and history of the Shrine, and the important role that it continues to play in the faith of the people.

Montmorency Falls
Classified as a historic site in 1994, Montmorency falls affords spectacular views over the St. Lawrence River and the capital. Renowned for its impressive 272-foot high waterfall, 1 1/2 times the height of Niagara Falls, the park features many points of interest.

Casino de Montreal
The Casino de Montreal is surrounded by a breathtaking parkland overlooking the St. Lawrence River and is situated in magnificent Parc des Iles. The Casino features 88 gaming tables with more than 1,700 slot machines, Keno, and electronic track horse racing. The Casino offers many restaurants from fine gourmet dining to a sumptuous buffet, fashionable bars with live entertainment and two boutiques.

Dress code is enforced. No sweat pants, shorts or beachwear.
Any clothing depicting violence or associated with any recognized violent group is prohibited.
Entrance is restricted to persons 18 years & older.

New York State Capitol
Sitting majestically atop Albany's State Street hill, the New York State Capitol has served as the seat of government for New York since the 1880s. The building is a marvel of late 19th-century architectural grandeur, built by hand of solid masonry over a period of 32 years.

The hotel features a Fitness Room

Le Parmigiano features Italian specialties (Pastas, Veal, Grills, fish) as well as Montreal favorites!
Cafe Castel, a European style cafe offers guests a unique ambiance to enjoy some of the finest sandwiches and salads.
There are also many restaurants just steps away from the hotel.

The Hilton Quebec is just steps from the Old Quebec attractions and all of the rooms have a breathtaking view overlooking the Quebec City region.

The hotel features a four season heated outdoor pool which is open year round as well as a fitness center that is open 24/7.

Refrigerators are $15.00 per stay (subject to change).

The Clarion Inn Lake George is conveniently located at the Adirondack Outlet Mall and only 3 miles from Lake George Village.

The hotel features an indoor pool, hot tub, and Fitness Room.
There is no restaurant on site. The Log Jam Restaurant is located 200 yards north of the hotel (walkable).

The hotel is 100% Non-Smoking
2 Floors; No Elevator

-There are no elevators at St. Anne's

Passengers with physical disabilities may find it difficult to participate in some of the activities on this tour.