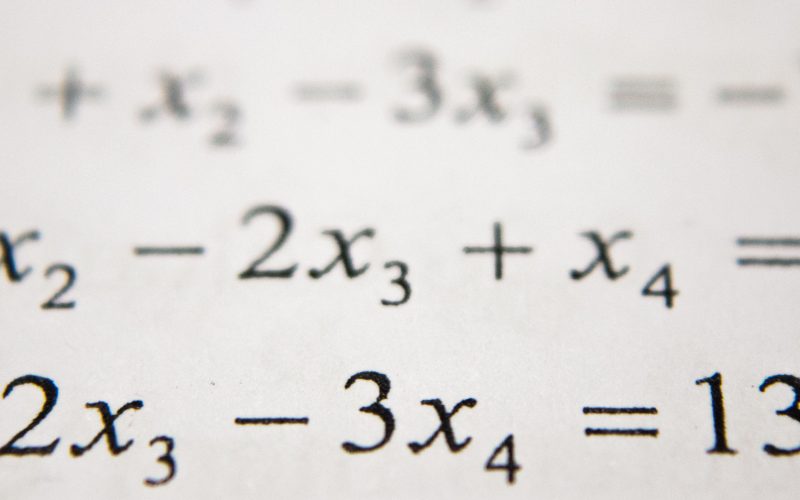 Remember that feeling in high school when you solved a tough equation? How about middle school algebra when you were trying to solve for Y? Yep, that’s what it feels like to have planned, executed and personally enjoyed a Starr Birthday Bash! And here’s the Y… OK, The WHY – Because we love our Starr Tour Guests!

So let’s start at the beginning. What does it take to find a destination for a Starr Birthday Bash?

Put those things together and what does it equal? A great Starr trip! 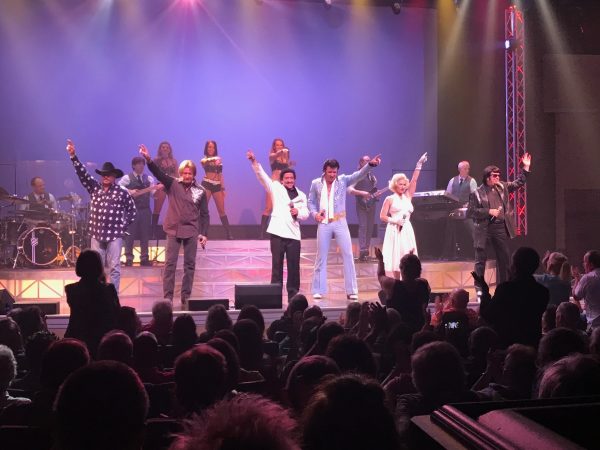 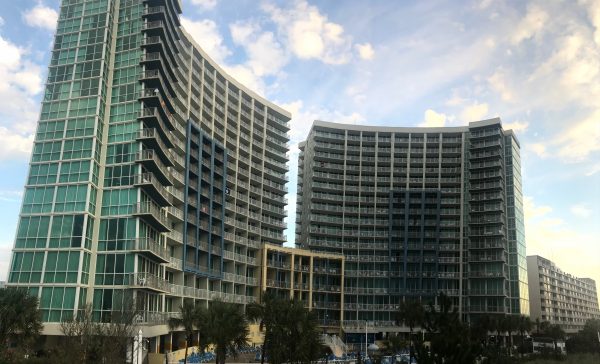 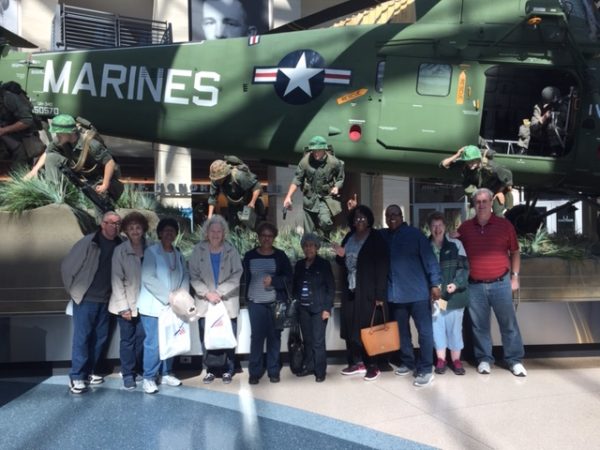 I was lucky enough to join our 4 Tour Directors and Drivers and 175 Starr tour guests in Myrtle Beach this past October. We had an excellent trip and here’s why:

We picked a destination that offered beautiful weather (we ordered it!).

We picked a hotel where every room had an ocean view and a balcony! The staff was so excited to host our Starr customers and showed us warm southern hospitality!

We had a great Birthday Dinner at the Giant Crab where the buffet had 171 items-I counted! We ate birthday cake and gave away lots of prizes to over 30 lucky winners!

We saw 4 fabulous shows! Each one was entertaining and dazzled us beyond expectation!

Everyone went home with smiles on their faces and wonderful travel memories! 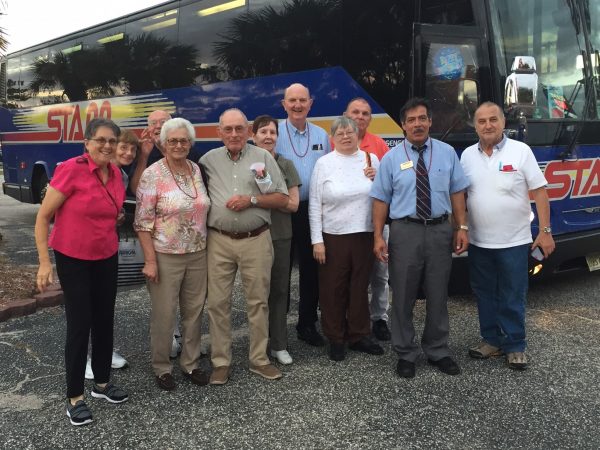 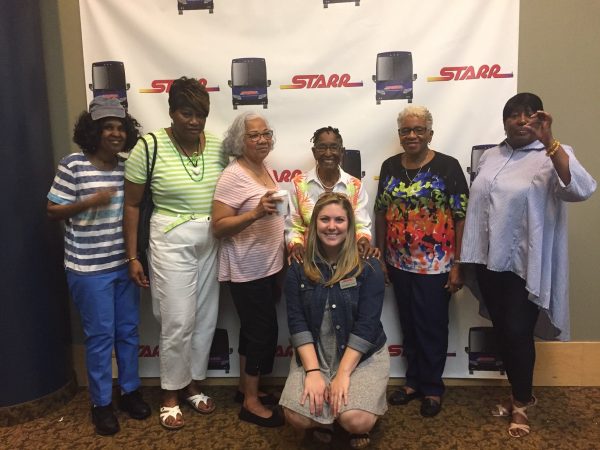 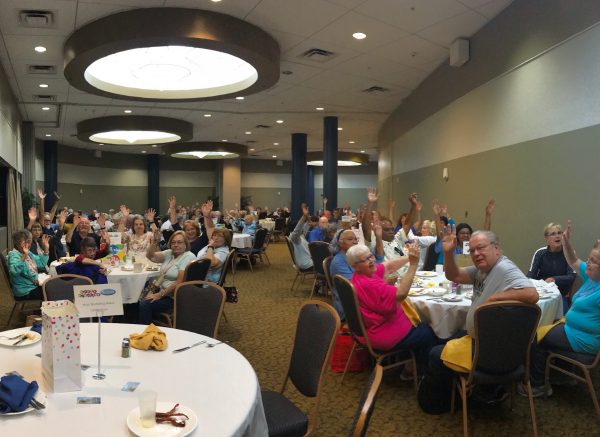 So for 2019, we did the same equation and we’re going to Branson and St. Louis, Missouri!!  https://www.starrtours.com/bus-tours/index.php/branson-mo-birthday-bash/tour-detail/3575

We’ll see 5 shows on this trip plus see the Gateway Arch and tour the Anheuser Busch Brewery! Join us! I promise you will be glad you did. We have over 30 people on board already and we’d love to have YOU! 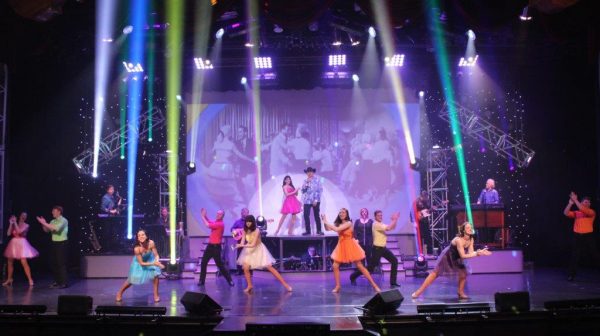 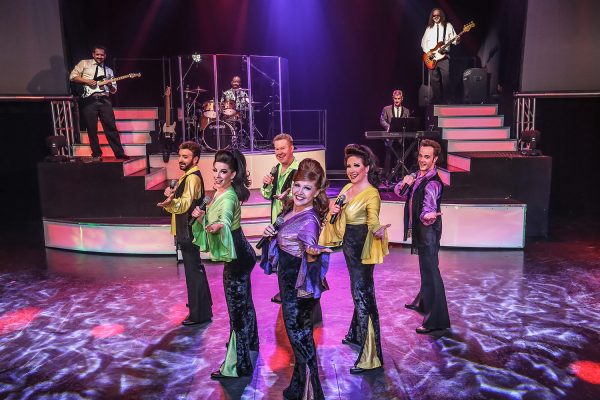 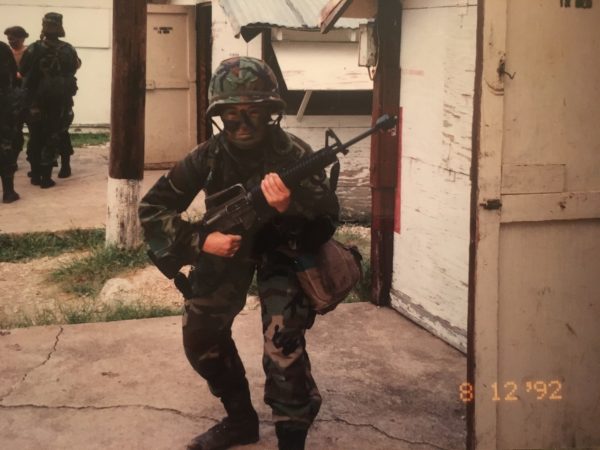 Every Veteran’s Day I am reminded of my time in service in the US Army. Most of my friends don’t even know that I served, and some are even shocked when they see a picture of me in my BDUs (Battle Dress Uniform) in full camouflage makeup, holding an M-16 rifle! Going into the military was no surprise to my family though… my father started off his military career in the Marine Corps but only lasted a couple days, then he went into the Navy and was sent to Vietnam in 1968-69 working in radio communications (he met and married my mom over there – she was a translator and also the desk clerk at their quarters!).  After Vietnam he trained to become an engineer aboard aircraft carriers and would go out to sea for several months. In 1981 he used the GI Bill to go to school for nursing and branch-transferred into the Army Nurse Corps, then retired in 1992. Since I grew up as a “military brat”, we moved frequently throughout the United States due to my dad’s assignments and training courses – I lived in 10 different places by the time I was thirteen! My dad’s father was a retired Army Quartermaster Officer who served in WWII and the Korean War, my brother was in the Marine Corps Reserves, my husband (whom I met in Army ROTC at Penn State) was an Army Field Artillery Officer, and his father graduated from West Point in 1965 and was sent to fight in the Vietnam War along with many of his classmates. 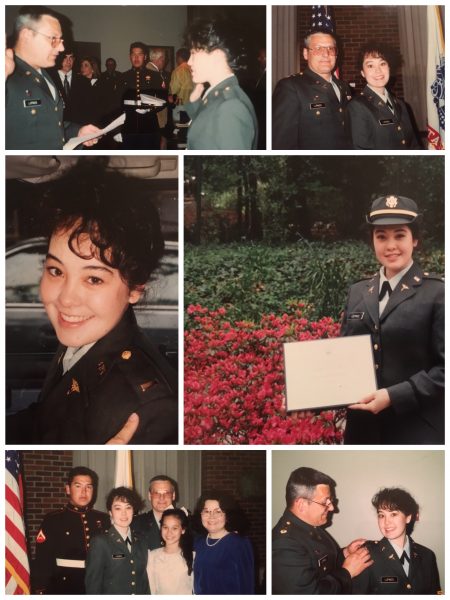 As you can see, I had a fairly strong military presence in my life, which influenced my decision to serve. I was awarded an ROTC scholarship, so I took 4 years of Army ROTC classes at Penn State, where I learned about military history and tactics, how to march and how to be a soldier, and most importantly I gained leadership skills. At graduation I was commissioned as a Second Lieutenant in the Army Nurse Corps, and I had the honor of having my dad swear me in! I was then sent to the Army Medical Department’s Officer Basic Course in Ft Sam Houston, TX and then served 5 years on active duty, assigned to the hospitals at Ft. Meade, MD and Ft. Lewis, WA. Even after my military career ended, I continued working at Madigan Army Medical Center as a civilian for a couple more years. Although it seems like a lifetime ago when I got out of the Army in 1997, I am always proud to say “I Served.”

Last year at Veteran’s Day, I casually mentioned to a fellow co-worker that I was in the Army. She thanked me for my service and we wondered if there were other Starr employees who were veterans. Thus the idea to write this blog recognizing Starr employees and their family members who are military veterans came about…

THANK YOU to all those who have served in the past and the present- we are all grateful for your service!

Please join me in saluting these other veterans of the Starr Family:

I was stationed at Ft Knox, KY and Ft Gordon, GA. I was a Stevedore, but never saw a ship! One of the jobs I had was to shovel coal to heat the barracks. In training I received the High Marksman award. I joined to serve my country and to pay for my education.  I was very fortunate to have served 20 years without seeing combat.  My highlights were being able to travel and live in some amazing places.  I spent 6 years in Germany, and one year in Korea. I also served in Oklahoma, California, Massachusetts, and Pennsylvania.  It was a very challenging and fulfilling career. The tears streaming down my face as I humbly try to pay tribute to my hero are no match to the physical and emotional pain my dad, John W. Pazdan, suffered as a witness to the horrors of WWII.  Enlisted in the US Army when he was just 18 years old, he was assigned to the European Theater in 1943.  As a member of the 53/54 Replacement Battalion he served as a crew member of a Sherman M4-A1 medium tank and engaged in battle in Belgium at the Battle of the Bulge.  During this conflict, his tank was struck and completely destroyed.  He was ejected from the tank and lay unconscious for 24 hours in sub-freezing weather.  The entire tank crew was killed.  After his rescue, he finished out his term of service for ten months in a hospital bed at Rhoads General Hospital in Utica, New York.

Like so many of the servicemen and women of “The Greatest Generation,” he never shared any of these details with our family.  I can only surmise that his courage and bravery to protect his country when he was a young man extended to protect his four children from knowing the atrocities of war.

As part of my welcome introduction on our Starr tours, I always include a salute to the servicemen and women and by doing so, it’s my way of saying, “Thanks dad, my hero.”

I joined the Reserves during the Vietnam era. Did not leave the US however; was in Louisiana and Texas. Most impacting memory was working as a Medic in the Valley Forge Hospital in PA where all the Amputee Soldiers returned for medical treatments.

I come from a family with a lot of military veterans. Several uncles and great uncles in the Navy and Army and one in the Air Force. Unfortunately, most of them have passed and I don’t know their stories, but I still have the letters that my grandfather and father sent back home to my grandmother while they served in the Army and Navy, respectively, mostly reassuring her not to worry about them. My grandmother worried about everyone, all the time, and never gave up on that intense love.

My father was stationed on a naval ship in Norfolk, Virginia at the time of the Vietnam War, but he was never sent anywhere else aside from a brief stint in Panama.  My mother grew up in Norfolk and had several friends in the Navy – she met my father through one of their mutual friends while he was stationed there. He was medically discharged because of a serious illness before he served his full 4 years and returned home to North Jersey. The illness almost killed him, but my grandmother nursed him back to health with beef blood juice and a few other concoctions. My mother drove up almost every weekend, from Virginia, by herself, to visit him. My grandmother thought she was crazy, that no woman should be driving that distance alone to see a man, but my mother quickly grew on her and became the daughter she always wanted.

His father served in the Army during World War II and was stationed in several places throughout Europe. Most of the letters he wrote back home to my grandmother, his fiancé at the time, were to tell her not to worry about him; alerting her when he was going to be on the move and unable to write and reassuring her of his love, and… sometimes gently scolding her for getting upset anyway after not hearing from him. I wish I had the letters she wrote. While he was stationed overseas, his mother and family kept a close watch on her – escorting her everywhere and making sure she wasn’t left alone too much. They cared about her, but she said mostly they were afraid that she would change her mind before my grandfather got back and find someone else. They were married over 60 years before my grandfather passed in 2008. In addition to those precious letters, I still have some of the items he brought back from WWII including a dress sword, some coins, and several medals he earned. He never talked about his experience.

I’m honored to have had so many brave men in my family.

Did you know? Starr offers a 5% discount on all motorcoach trips, all year long to any and all US Veterans!

Starr values our veterans, and would like to formally salute anyone who has risked their lives for our country.