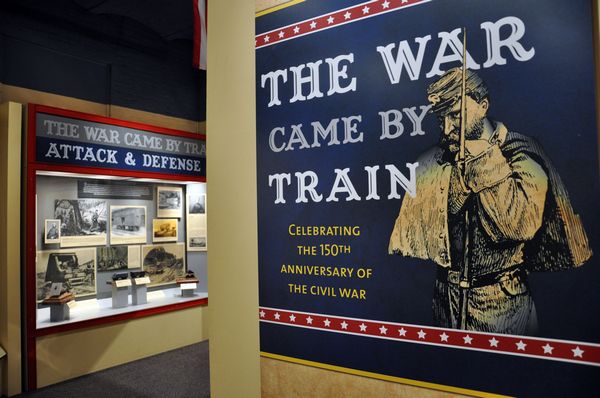 Embark on a journey into Baltimore's Civil War past and learn how this famous city helped shape history.

Day 1:
Travel to Baltimore, MD
Lunch on own in Baltimore
Admission to The B&O Railroad Museum: Baltimore and "The War Came by Train" Tour
One overnight at Days Inn Inner Harbor
Dinner at Pratt Street Alehouse

Nicknamed "Mr. Lincoln's Railroad" because of its importance to the Northern war effort, the railroad transported thousands of soldiers and tons of supplies for the Union cause. The Mount Clare Shops maintained every aspect of the railroad's operation during the war. It was one of the first Baltimore facilities secured by Union troops. The museum restores and exhibits locomotives and rolling stock from all eras of the railroad's history.

"The War Came by Train" Sightseeing Tour
Explore the most extensive of authentic Civil War period locomotives and rail cars in North America. Learn why the B&O Railroad was the most important and influential railroad during the Civil War. See the B&O's "Iron Horses" that moved hundreds of thousands of soldiers and tons of supplies for the Union war effort. Experience the personal stories of men and women of military and civilian life who lived or worked along railroad lines and of the life and death struggles that affected those along the B&O's rails.

*Mt. Vernon ï¿½ Home of the first permanent monument to George Washington in the United States and a statue of Chief Justice Roger B. Taney, the Maryland born author of the infamous Dred Scott decision.

*Spirit of the Confederacy Monument ï¿½ Located on Mt. Royal Terrace near the campus of the Maryland Institute College of Art, this monument recalls the city's divided loyalties during the Civil War.

*Greenmount Cemetery ï¿½ Many of Baltimore's most prominent citizens are laid to rest here, as well as one not so prominent; President Lincoln's assassin, John Wilkes Booth. He lies beneath an unmarked grave in the Booth family plot.

*Camden Station ï¿½ President Lincoln passed through this historic station twice during his life, and once more when he laid in state here after his assassination.

*Federal Hill (photo stop) ï¿½ Today, this city park offers sweeping views of the Baltimore skyline and Inner Harbor, but during the Civil War it represented a key strategic position seized by Union forces early in the conflict and held for the duration of the war to deter Southern sympathizers living among the citizens. A cannon atop the hill is still pointed towards the heart of city.

ï¿½President Street Station, where the march of Union soldiers began that resulted in the riot.

When workers laid the foundation in 1849, no one could imagine the amazing history that would play out in and around President Street Station. From Lincoln's secret passage through the station under pre-dawn stars to the first bloodshed of the Civil War, President Street Station was an eye witness to key events in our nation's history.

Today the oldest surviving railroad station in an urban setting, President Street Station stands proudly among new skyscrapers and a redeveloped waterfront. Sited near Baltimore's Inner Harbor, Harbor East, and Little Italy neighborhoods, the station welcomes visitors to learn about Baltimore's 19th century railroads, perilous journeys to freedom along the Underground Railroad, President Lincoln's travels through the city, and how Massachusetts soldiers traveling through in 1861 confronted danger and death just steps away from the station's grand entrance.

Ft. McHenry National Monument and Historic Shrine
While notable as the birthplace of the Star-Spangled Banner, the fort also served as a prison for Southern sympathizers during the Civil War. Prominent Baltimoreans, including the mayor, were detained here.

Our tour provides an overview of the ship's history, a comprehensive walk-through fore-and-aft, spar-deck-to-hold.

Hands-on activities punctuate the tour and bring into focus some of the tasks associated with service aboard a mid-19th century, all-sail, man-of-war.

The Days Inn Baltimore Inner Harbor is located in the heart of downtown Baltimore's exciting Inner Harbor area close to all area attractions and restaurants.

The hotel features a seasonal outdoor pool and fitness center.

Enjoy traditional American fare, or relax with a cocktail, at the all-new Harbor Grill. You can also grab a gourmet coffee or snack to-go at the Java Cafe. Both are located on-site.

-USS Constellation - There are 2 service elevators that give access to the top two decks of Constellation. The first is on the outside of the museum building which takes you to the ship. The 2nd is on the ladder passageway leading from the top deck to the second (gun) deck. These elevators can hold 1 person in a wheel chair or motorized scooter at a time. Unfortunately, the overheads are too low to allow for elevators to the lowest two levels of the ship (the berth deck and ship's cargo hold). They do, however, have a booklet with pictures of those two levels should anyone in our group be interested.