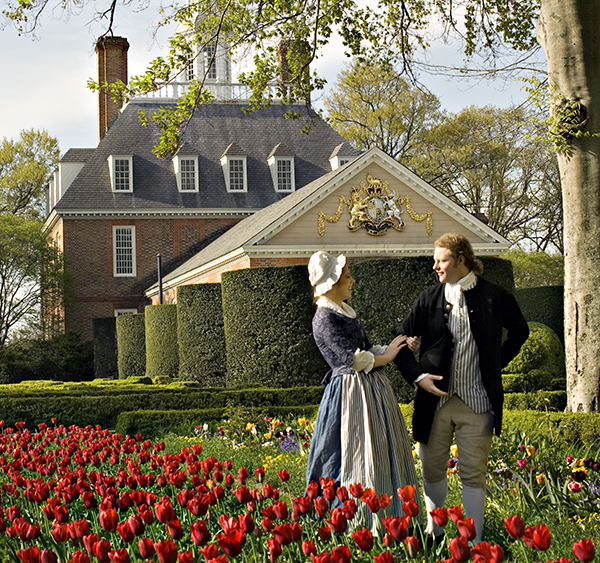 Behind every Revolutionary Hero there was a woman. Enjoy this powerful tour that explores the role of Women in the 18th Century and learn about the difference between Women's Rights then and now.

Glasses, canvases, and paintbrushes are provided as a local artist guides you through the party, stroke-by-stroke.

Colonial Williamsburg
Colonial Williamsburg is a historic site of 173 acres, featuring preserved and restored buildings surviving from the era when Williamsburg was capital of the Virginia Colony and a gathering place for the leaders of the American Revolution. Visit the Historic Area, Colonial homes, public buildings, and craft shops. Costumed interpreters bring to life the residents of this 18th century town.

Women at Work Tour at Colonial Williamsburg
We've all heard that a woman's place is in the home during the 18th century, but it was far from the only place. Enjoy a walking tour discussing the often-surprising realities of women's labor, skills and rights in 18th-century Williamsburg and the Colonial Atlantic World.

Explore roughly half a mile of sites, stories and continuing research into hidden history.

Art Museums of Colonial Williamsburg
The distinctive collections of the DeWitt Wallace Decorative Arts Museum and the Abby Aldrich Rockefeller Folk Art Museum are located under one roof. You'll find wonderful examples of American and British antiques and decorative art from the 17th, 18th and 19th centuries as well as bold and imaginative pieces of colonial and contemporary folk art.

Dinner at King's Arms Tavern
Originally opened by Jane Vobe in 1772, this authentic reproduction public house serves up a transporting experience for the senses in Colonial Williamsburg. Everything is true to the time period at King's Arms Tavern, from the fashion sported by servers to the pewter candlesticks - all adding to an air of colonial elegance.

This living-history museum offers a full-scale re-creation of the Powhatan Indian Village, the three original ships (1607) and a working colonial fort. Plus, learn the REAL story of Pocoahontas.

Your guided tour is led by a trained guide who highlights each museum's exhibition galleries and outdoor living-history area.

While here, see the film, "The Siege of Yorktown" and learn of Sarah Osborn Benjamin, who followed her soldier-husband's Continental Army unit and spoke to George Washington at the Siege of Yorktown. This moment is taken from her 1837 pension deposition, and the moment is reimagined in the 4D Siege Theater film.

Tall Ship Sunset Cruise
Set sail on a scenic sunset cruise aboard the Tall Ship Alliance on the York River. Come aboard and enjoy evening views of the river and discover the tranquility of cruising onboad a stunning vessel, powered only by the wind in our sails! Sights you may see include dolphins or osprey, 18th-century homes, naval warships, the Yorktown Battlefield, and the scenic riverwalk.

Springhill Suites Williamsburg is located in the heart of Colonial Williamsburg's historic district close to populer nearby attractions.

The hotel features an Indoor Pool and Fitness Room.

The hotel is non-smoking.

-This tour involves a lot of walking.