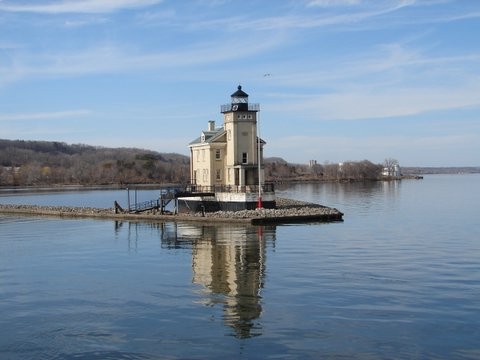 Please Note: Day 3 on the August departure order of attractions are reversed.

Every Starr trip includes deluxe motorcoach transportation and overnight accommodations.
Hudson River Boat Cruise
Discover the Nationally Designated Heritage River, the Hudson, aboard the "Rip Van Winkle." Journey back to a special time and place, the land Washington Irving described as where the "lordly Hudson" meets the noble heights of the Catskill Mountains.

Relax and enjoy a clear view of historic Hudson River lighthouses, waterfront mansions, and other notable locations. Highlighted by a knowledgeable cruise tour staff, you'll see some of the region's most unique and fascinating locations on the Hudson River waterfront!

Snack bar is available for light snacks and drinks. Cash only! No credit cards accepted.

Vessel is Non-Smoking and Handicapped access is limited.
Main Deck is partially enclosed. Restroom facility on Main Deck only. Open Upper Deck has a roof covering.

Franklin D. Roosevelt National Historic Site
At the Home of Franklin D. Roosevelt National Historic Site, visit FDR's Springwood, the estate that he loved and the place he considered home. The first US Presidential Library was started by FDR here. Visit the Home of FDR and Presidential Library & Museum to learn about the only President elected to four terms.

Innisfree Garden
Enjoy a guided tour of Innisfree Garden.
Recognized as one of the ï¿½worldï¿½s ten best gardens,ï¿½* Innisfree is a powerful icon of mid-twentieth century design.
Its sweeping landscape merges the essence of Modernist and Romantic ideas with traditional Chinese and Japanese garden design principles in a form that evolved through subtle handling of the site and slow manipulation of its ecology. The result is a distinctly American stroll garden ï¿½ a sublime composition of rock, water, wood, and sky achieved with remarkable economy and grace.

This is a walking tour. There are no paved paths and the terrain can be steep and often irregular. There are places to sit along the way. The tour is outdoors. There are no indoor locations.
Restroom facilities are porta potties.

Millbrook Winery
Millbrook Vineyards & Winery is called "the Hudson Valley's flagship winery" by The New York Times and "a great place to visit" by The Wall Street Journal.

Their world-class wines have won acclaim from critics and consumers alike, and they compare favorably with top wines from California and France. Millbrook is considered one of the top wineries not only of the Hudson River Valley but all of New York State and indeed the eastern seaboard.

The tasting consists of 3 white and 3 red wines as well as their own olive oil.

Group tastings tour will be held upstairs in loft area. There are approximately 14-16 steps leading up to it.

Vanderbilt Mansion
The Vanderbilt Estate in Hyde Park, New York is perhaps the best, most intact example of the types of estates constructed by wealthy industrialists in the 19th century. The fully-furnished, 54-room mansion is placed in a wondrous landscape with breathtaking views of the Hudson River and distant Catskill Mountains. It offers a glimpse into a past world known by only an elite few.

The Vanderbilt Mansion is accessible; however the elevator in the mansion is historic (c.1935) and frequently needs servicing. The tour consists of the first, second and basement floors of the mansion. There are 62 steps to climb from the entrance way to the second floor and then back down to the basement.

West Point Museum
Over 45,000 artifacts housed in 6 different galleries, each developed around a different storyline written by the 3 sources of historical expertise at West Point: the teaching staff of the Department of History, the West Point Historian, and the cultural staff of the West Point Museum. The six exhibition galleries in the museum focus on key topics of, military interest, tactics, strategy, the technological development of arms as well as a view of U.S. Army history seen through the contributions it has made to the building of our nation. Exhibits are housed on 3 levels in the Olmstead Hall Building, named after Major General George H. Olmsted USMA 1922 who donated nearly $2.5 million to cover construction costs related to specialized museum needs not provided in the congressional appropriation. Exhibits include American Wars Gallery, U.S.Army Gallery, History of Warfare Gallery, West Point Gallery, Large Weapons, and Small Weapons.

West Point Academy
West Point Sightseeing Tour - 1 and a half hour riding & walking tour of West Point Academy to include Cadet Chapel & Trophy Point. See the central area where cadets live and attend classes. Enjoy the history and beauty of this section of the post. Visit Parade Grounds where today's cadets drill and parade. This is where George Washington drilled and organized the Continental Army. Tour Trophy Point, Battle Monument and relics of wars dating back to the Revolution. Get ready for a million dollar view of the scenic Hudson Valley.

Cadet Chapel: This Gothic Cathedral with high vaulted ceiling, towers, stained glass and buttresses has been called the only true intuitive example of Christian Art.

The hotel features an indoor pool and fitness center.

The hotel offers breakfast daily and the First Capitol Bistro & Bar is open for dinner. There is also a cocktail lounge adjacent to the restaurant.

This is an non-smoking property.

Note: The beds are high; A step stool can be requested (not guaranteed)

THE FOLLOWING INFORMATION IS WHAT WILL BE REQUIRED FOR ADMISSION TO WEST POINT. PUT IN SPECIAL COMMENTS:
Name: First, last and middle initial
DOB: Month, day and year
Male or Female
State or Country you are from
Type of Photo I.D. you will be bringing on tour

Note: Children will not need an I.D., however all of the above information will be needed.

-Innisfree Garden--This is a walking tour. There are no paved paths and the terrain can be steep and often irregular. There are places to sit along the way. The tour is outdoors. There are no indoor locations.
Restroom facilities are porta potties.