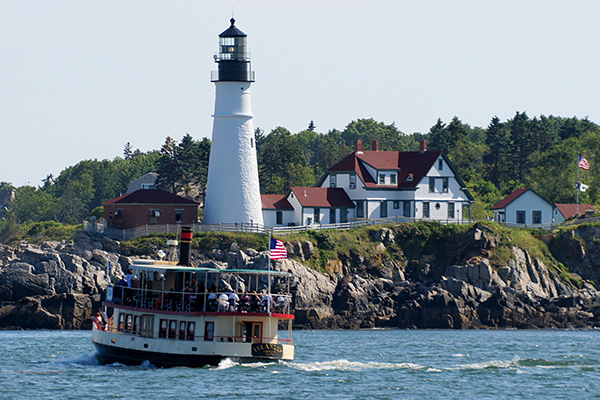 Day 1:
Travel to Ogunquit, ME
Lunch on own en route
Three overnights at Meadowmere Resort-Ogunquit
Dinner included at Jonathan's Restaurant

Day 3:
Breakfast at hotel
Travel to Kennebunkport, ME
Guided Sightseeing Tour of Kennebunkport
Travel to Ogunquit, ME
Lunch on own in Ogunquit
Continue touring Maine's Southern Coast to include a visit to Cape Neddick Lighthouse
Visit Stonewall Kitchen in York, ME
Dinner at Clay Hill Farm

Day 4:
Breakfast at hotel
Check out
Travel home
Lunch on own en route

Portland Head Lighthouse
Maine's oldest and most visited lighthouse is also one of the most photographed lighthouses in the United States. Portland Head's lantern was illuminated on January, 10, 1791 and its first lightkeeper was appointed by President George Washington.

Portland Discovery Lighthouse Lovers Cruise
Narrated 90 minute scenic cruise through the busy harbor and innermost islands to see lighthouses, forts, lobster boats, seals, and seabirds. Four lighthouses can be seen up close with as many as seven in view during the cruise, including a closeup view of Maine's oldest and most photographed lighthouse, Portland Head Light!

Welcome to The Meadowmere Resort, a family owned hotel in Ogunquit offering a warm guest experience. The Resort is conveniently located to the village of Ogunquit.

Guestrooms include hair dryer and coffee maker. All rooms are non-smoking, including the balcony areas.

No elevators
Cots are available for $10.00 per night plus tax. Subject to change.