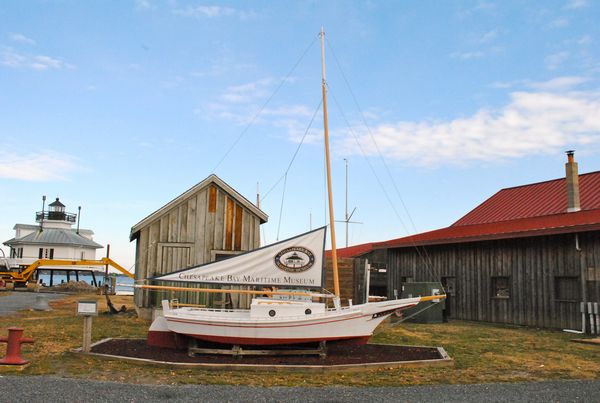 Experience first-hand some of the fascinating historical tidbits that revolve around lighthouses and maritime travel. Then, throw in the excitement of a magic show and a visit to a casino for the perfect Mid-Atlantic vacation!

Day 2:
Breakfast at Touch of Italy Restaurant (at hotel)
Visit O.C. Life Saving Station Museum
Tour of Assateague Island, home of the "Wild Ponies"
Lunch on own in Berlin, MD
Educational Eco-Cruise aboard the Assateague Adventure
Return to hotel
Dinner at Touch of Italy Restaurant (Located at the hotel)
Travel to Millville, DE
Enjoy a fascinating Magic Show at the Dickens Parlour Theatre

The Museum's 18-acre waterfront campus, with nine exhibit buildings and vistas of the beautiful Miles River, anchors the town of St. Michaels, MD.

A visit to the museum offers accessible history through real people, real work, and original exhibits.

O.C. Life Saving Station Museum
Dedicated to collecting and preserving the history of the United States Life-Saving Service on the Eastern Shore of Maryland, Delaware and Virginia, the museum also houses the unique and colorful history and heritage of Ocean City, Maryland.

Delightful exhibits concerning the history of the Life-Saving Service feature aquariums, doll-house replicas of hotels that once lined the boardwalk, shipwreck artifacts, a mermaid collection, bathing suits from the past, and the Sand-From-Around-the-World exhibit. This beautifully restored building, once scheduled for demolition, now stands as Ocean City, Maryland's showplace.

Assateague Island Sightseeing Tour
Assateague Island is known for being the "Home of the Wild Ponies" that roam freely on the beach and throughout the park, but it is also a priceless heritage of wildlands and wildlife. Sightings of the white-tailed deer and small Sika deer, which inhabit these forests and freshwater marshes, are not unusual. Great photo opportunities are found along the island! Assateague also hosts a variety of birds and waterfowl that include the piping plover, egrets, and herons.

The Visitors Center features a must-see film of the Island along with educational exhibits, aquariums, maps, and other publications.

Assateague Island Nature Boat Cruise
Climb aboard "The Assateague Explorer" for an exciting eco-cruise around the Assawoman Bay.

Each cruise features a professional naturalist and on-board touch tank so you can discover and learn firsthand about the unique coastal eco-system.

Join in on the adventure as we actually land on Assateague Island! Lend a hand as we toss a net, hoist a crab pot, and learn all about the fascinating creatures we discover as our naturalist collects and identifies our catch.

Magic Show at The Dickens Parlour Theatre
See some of the world's best magicians perform parlour magic in an intimate 60 seat theatre.

After the show guests are invited to the Parlour for a meet and greet with the performers and little more magic at the tables.

At 89 feet in height, the lighthouse cost $23,748.96 to build. The lens that magnifies the light was imported from France.

The light originally burned whale oil before switching to kerosene. It was tended by two men who lived with their families in houses on either side of the lighthouse.

Built in 1767 with money raised from a series of lotteries in Philadelphia, the lighthouse was made of stone brought down from the Brandywine River north of Wilmington, DE near the Pennsylvania border.
It was built on the north side of the Great Dune, 46 feet above sea level, to obtain additional height.
Because the dune moved 3 to 5 feet a year, it eventually claimed the lighthouse.
Before collapsing in April 1926, the Cape Henlopen Lighthouse guided vessels from the Atlantic Ocean into the Delaware Bay for more than 150 years.

Today, you can see a portion of it in the water. The lighthouse is actually called the "Delaware Breakwater."

The hotel features an indoor and outdoor pool, exercise room, and hot tub.

Dine at A Taste of Italy, Sterling Seafood Grill or the Original Pool Bar (Seasonal)