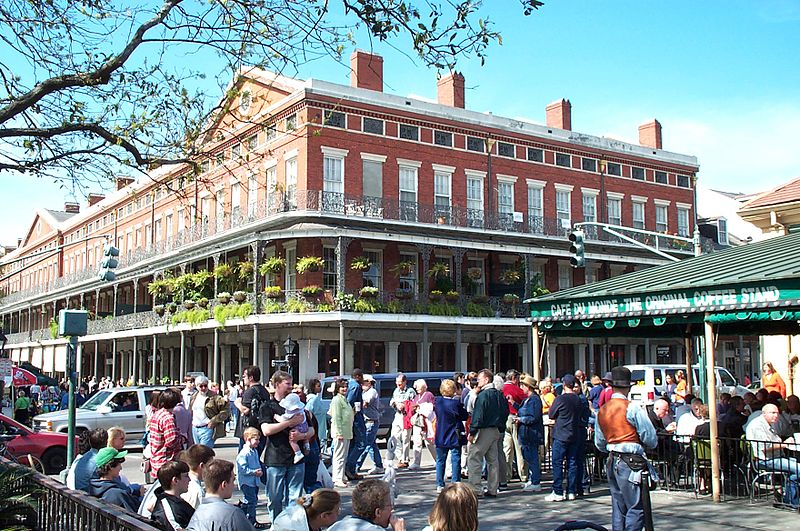 New Orleans is more than just the French Quarter, Bourbon Street and the festive spirit of Mardi Gras. It's known for its vibrant live-music, nightlife, and spicy, singular cuisine reflecting its history as a melting pot of French, African, and American cultures.

Day 2:
Breakfast at hotel
Check out
Travel to Marietta, GA
Lunch on own en route
One overnight at Drury Inn Northwest
Dinner on own

Day 4:
Breakfast at hotel
Guided tour of New Orleans
Lunch on own
Free time on own in Jackson Square
Admission to Mardi Gras World
Mississippi River Jazz Dinner cruise aboard the Steamboat Natchez

Day 5:
Breakfast at hotel
Jazz Brunch at the Court of Two Sisters
Admission to the National World War II Museum and Victory Theater
Return hotel
Remainder of day on own
Dinner on own

Day 7:
Breakfast at hotel
Check out
Travel to Marietta, GA
Lunch on own
Note: Time change to Eastern Time
One overnight at Drury Inn Northwest
Dinner on own

Day 8:
Breakfast at hotel
Check out
Travel to Fayetteville, NC
One overnight at Fairfield Inn
Dinner on own

Day 9:
Breakfast at hotel
Check out
Travel home
Lunch on own en route

Start in the world-famous French Quarter, a quaint, mysterious area where the sights and sounds abound. Visit a historical cemetery, one of New Orleans' "Cities of the Dead." Here, discover the unique above ground burial system. Following the path of the St. Charles Avenue streetcar, the oldest continuously operating passenger railway system in the world, pass stately mansions, the homes of former kings and queens of Mardi Gras and the beautiful Garden District.

The colors, the lights, the music, the joie de vivre. It's all here in one magical place where you can peek behind the curtain and see Mardi Gras in the making. You haven't truly experienced Carnival until you've explored Mardi Gras World.

Dinner Cruise
Savor the beauty and romance of the New Orleans skyline aboard the last authentic steamboat on the Mississippi River... the Steamboat Natchez.

Enjoy casual buffet-style dining, breathtaking views of the city and live jazz by the Grammy nominated "Dukes of Dixieland."

Afterwards, stroll the decks of this beautiful boat, ideal for photographs!

Court of Two Sisters
The Court of Two Sisters' location at 613 Royal Street once housed a governor of colonial Louisiana, later becoming the home of Bertha and Emma Camors, the two sisters after whom the Fein Family's landmark restaurant is named. The sisters owned a "notions" shop here, selling imported Parisian perfume and other niceties for New Orleans' upper-class ladies.

National WWII Museum
From the beaches of Normandy to the sands of Iwo Jima, The National World War II Museum's exhibitions blend personal accounts, artifacts, documents, photographs, and never before seen film footage to tell the stories of the amphibious landings that made victory in World War II possible. Special Exhibitions draw on Museum collections and relevant traveling exhibitions to further explore and illustrate the war that changed the world.

"Beyond All Boundaries" at the Victory Theater, created exclusively for The National World War II Museum, is a unique and powerful 4-D cinematic experience. It tells the tale of the Greatest Generation's journey from Pearl Harbor into the fire of epic battles to America's final victory in the War That Changed the World in the words of the veterans themselves.

Cajun Pride Swamp Tour
Cajun Pride Swamp Tours is unique in that the privately owned swamp ensures that your narrated tour will not be disturbed by other boats.
The native Cajun Captains are all natural...homegrown in the Bayous of South Louisiana. With accents and humor they will take you back to the early days of Louisiana bayou and swamp explorations through the primitive beauty of the moss-draped cypress trees and show off the American Alligator and abundant wildlife.

Experience up-close the fauna - the inhabitants of the swamp; the flora - the sweet smell of the wild hibiscus, rose mallow, and marshmallow plants; and the unique history of the Cajun town of Frenier within the Manchac Swamp.

New Orleans School of Cooking
Located in the heart of the French Quarter, the New Orleans School of Cooking teaches the basics of Louisiana cooking in a way you will never forget! Fun is the key ingredient in their kitchen. Their Creole/Cajun experts teach New
Orleans specialties such as Gumbo, Jambalaya, Bananas Foster, and Pralines and season them with history, trivia, and fun stories! It is a "ga-ron-teed" good time!

The Drury Inn Northwest is conveniently located to downtown Atlanta.

The hotel features an indoor/outdoor pool, whirlpool and fitness center.

Ruby Tuesday is adjacent to the hotel and there are several nearby restaurants.

Guestrooms include coffeemaker, iron/board, and hairdryer.

The Bienville House Hotel is conveniently located in the heart of New Orleans and is just steps away from many of the most popular French Quarter attractions.

The hotel features an intimate outdoor courtyard and pool.

Guestrooms include coffeemaker, hairdryer, and iron/board.