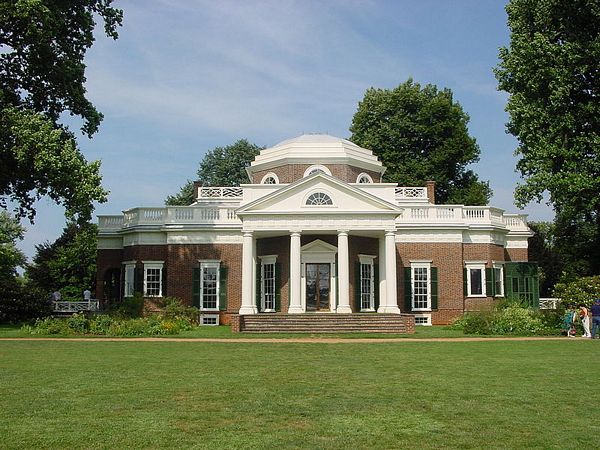 Experience a trip rich in American history as you enjoy the breathtaking beauty of Virginia's Blue Ridge Mountains and the homes of three former US Presidents.

Day 3:
Breakfast at hotel
Check out
Travel to Orange, VA
Admission and guided tour of Montpelier
Travel home
Lunch on own en route

Every Starr trip includes deluxe motorcoach transportation and overnight accommodations.
Monticello
One of the most beautiful estates in Virginia, Monticello was designed by Thomas Jefferson and built over the course of 40 years. Most of the interior furnishings are original.

Monroe and his wife, Elizabeth Kortright Monroe of New York, owned James Monroe Highland from 1793 to 1826 and made it their official residence from 1799 to 1823. After the Monroes' death, the name of their farm was changed from "Highland" to "Ash Lawn." Recently, they returned to the name James Monroe used for his Albemarle County home from 1799-1823. The newï¿½oldï¿½name for James Monroe's Highland is now accompanied by a brand identity that reflects its direct connection with Monroe, the youngest of the Virginia Dynasty presidents.

Today, visitors can tour the fifth president's home, which was recently refurbished based on new research and inventory lists. Original and period French and American furniture, boxwood gardens, and a 535-acre working farm await visitors.
Reconstructed using archaeology and a 1908 photograph, the slave quarters stand alongside two original outbuildings. Enjoy the resident cows, sheep, chickens, and peacocks that complete the working farm atmosphere.

Montpelier
Nestled in the foothills of the Blue Ridge Mountains, Montpelier was the lifelong home of James Madison, known as "Father of the Constitution." Madison was raised at Montpelier, lived here after his marriage to Dolly, returned here after his presidency, and died here in his study surrounded by the books and papers that marked so much of his life's work.

Visit starts with a brief film presentation in the Visitors Center. Tour of Mansion is guided. Self Guided visit through the grounds.

Michie Tavern
Michie Tavern has welcomed travelers for more than 200 years. Imagine arriving by horseback, on foot or by coach. The rooms would be thick with the scent of cooked venison and tobacco. Voices, some raised in heated political debate, would carry from room to room. As you cross the threshold, you enter another time. The costumed hostess welcomes you into the past as "Stranger," an early 18th century term for a traveler.

The Tavern's dining room, the Ordinary, features hearty Midday Fare offered by servers in period attire. The rustic Tavern setting renders a dining experience rich in southern culture and hospitality. Their southern buffet is based on 18th century recipes.

Maintained by the Charlottesville Parks and Recreation Department, the Historic Downtown Mall is considered one of the finest urban parks in the country. One of the longest pedestrian malls in the United States, Historic Downtown Mall is home to a vibrant collection of over 120 shops and 30 restaurants located in the historic buildings on and around old Main Street Charlottesville.

Emmet's Restaurant serves breakfast and dinner.
The lounge is the ideal spot to unwind and enjoy specialty drinks with great food in a casual friendly atomsphere.

Guest Rooms include a coffee maker, hairdryer, and iron/board.

-Michie Tavern - Advise your travel advisor if you are on a restricted diet which will allow us to notify Michie Tavern in advance. Michie Tavern will try to accommodate by baking their chicken.

-Montpelier - Only first floor of mansion is wheelchair accessible.