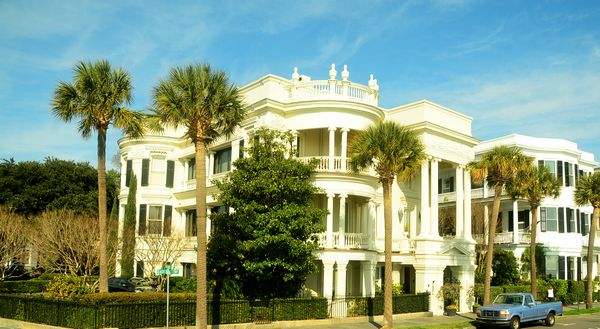 Submerse yourself in the Southern charm of Savannah's hospitality, moss-draped oaks, stately mansions, and the history and culture of Charleston.

Day 2:
Breakfast at hotel
Check out
Travel to Beaufort, SC
Lunch on own
Guided Sightseeing tour of Beaufort, SC
Tour Parris Island Marine Base
Travel to Savannah, GA
Two overnights at Courtyard by Marriott, Savannah
Dinner on own

Day 3:
Breakfast at hotel
Guided trolley tour of Savannah historic area followed by a tour of the Massie Heritage Museum
Lunch on own
Free afternoon on own in Savannah
Dinner on own
Two hour Musical Show at Savannah Theatre

Day 4:
Breakfast at hotel
Check out
Travel to Charleston, SC
Guided Tour of Charleston
Lunch on own
Free time at City Market
One overnight at Springhill Suites
Wine and cheese reception at hotel
Spirit of Carolina Dinner Cruise

Day 6:
Breakfast at hotel
Check out
Travel home
Lunch on own en route

It's the extraordinary architecture, lush botanicals, and captivating stories of this historic, coastal city that make for an unforgettable vacation experience.

Your friendly conductor will narrate the tour with a fascinating and fun mix of trivia and humorous stories.

Tour includes On & Off Boarding Privileges at all designated stops.

Massie School opened in 1856 as Savannah's first free public school, operating continuously except for its use as a Union hospital during the Civil War Federal occupation of the city and as a Freedmen's school during Reconstruction.
Closed as a regular school in 1974, Massie reopened in 1977 as a teaching museum for history and architecture with programs attracting visitors of all ages. A local school system property, the site hosts exhibitions and programs throughout the year.

Magnolia Plantation & Gardens
Founded in 1676 by the Drayton family, Magnolia Plantation has survived the centuries and witnessed the history of our nation unfold before it from the American Revolution through the Civil War and beyond.

Step back in time with a half-hour guided tour of the Drayton family home, the third to grace the site in more than three centuries of Drayton family occupation. Ten rooms are open to the public, furnished with early-American antiques, porcelain, quilts, and other Drayton family heirlooms.

Sit back and enjoy the Nature Train. Experience history and wildlife on this action-packed tram tour of the plantation's wetlands, lakes, forests, and marshes. A naturalist guide helps you spot alligators, turtles, egrets, and herons in native habitats.

Spirit of Carolina Dinner Cruise
The Spirit Line Dinner Cruise is Charleston's First & Finest dinner cruise experience. The
"SPIRIT OF CAROLINA" is the largest and most elegant dining yacht to ply the waters of Charleston Harbor.

She features climate-controlled dining salons and open observation decks from which passengers experience the beauty and history of this area.
Leisurely cruise past the palatial homes of Charleston's famous Battery & the towering Cooper River Bridges.

This three hour cruise features a 4-course meal prepared to order onboard with DJ entertainment & dancing.

A Cash Bar is available.

Beaufort, SC Sightseeing tour
Guided sightseeing tour through the historic neighborhood of Beaufort, SC, known as the "Queen of the Carolina Sea Islands." Beaufort is a city of lordly & striking mansions of pre-Revolutionary and pre-Civil War eras. Beaufort is also known for major motion pictures filmed there, including "The Big Chill," "The Great Santini," "Prince of Tides," and "Forrest Gump."

Parris Island Marine Base
Its rich history dates back to the mid 1500s when Spanish and French explorers clashed on the Island's shores as they sought a strategic foothold in the New World.

Today it is one of the main recruit training stations for the United States Marine Corp. Under the watchful eyes of the Drill Instructors, some 20,000 men and 2,000 women complete their training at Parris Island each year.

Highlights of our visit will be the Iwo Jima Monument, Parade Field, and the Parris Island Museum.

Enjoy a performance of The Piano Men!

The Savannah Theatre is excited to present for the first time on our stage ï¿½ three world class pianists playing together in an exhilarating tribute to The Most Famous Singer/Piano Players of All Time! Along with the cast and band, the piano men will include Bobby Hamilton, direct from Las Vegas where he played for Cirque du Soleilï¿½s production of ï¿½Zarkana;ï¿½ Sterlin Colvin, premiere entertainer on Hilton Head Island for 20 years; and Kenny Munshaw, who has performed around the world and shared the stage with such musical legends as Gene Simmons of KISS, Shania Twain, Beverly Mahood, Tim McGraw, and Billy Ray Cyrus.
Sing along as the cast leads them on a rip-roaring recall of the hottest hits of Billy Joel, Elton John, Ray Charles, Stevie Wonder, Jerry Lee Lewis, Fats Domino, Barry Manilow, Paul McCartney, Elvis Presley, Floyd Cramer, Scott Joplin, Liberace, and many, many more! The pace of this show will be mind-boggling!

Conveniently located off of I-95, the Fairfield Inn Fayetteville features an outdoor pool and fitness room.

The hotel offers complimentary continental breakfast each morning. Nearby restaurants include Cracker Barrel and Ruby Tuesday.

Guest rooms feature a coffeemaker, iron/board, and hairdryer. Refrigerators are available for no extra charge. Cots are available at no charge but only when room has 1 bed.

The hotel is conveniently located just a short trip over the Ashley River to the downtown historic district.

The hotel includes an outdoor pool, whirlpool, and fitness center.

Springhill Suites does not have a full service restaurant on site, but includes a complimentary continental breakfast each morning.

-This trip has expanded leg room for your comfort.

Parris Island; Date of Birth and Gender are needed for all passengers.

This tour requires a lot of walking

-Magnolia Plantation--House is not wheelchair accessible.

Charleston Harbor Cruise--Daytime harbor tour is not wheelchair accessible. All guests are required to climb 5 steps at boarding.