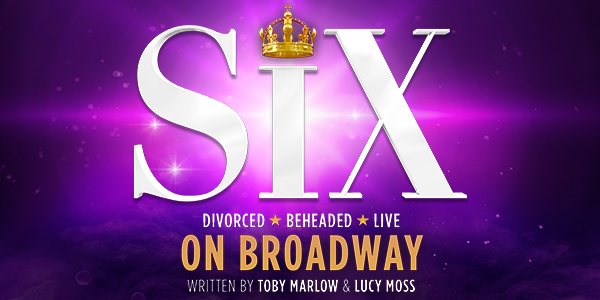 Experience an electrifying pop-concert spectacle - flipping the narrative on the one-sided story of the six ex-wives of King Henry VIII.

Approximate 11:30am arrival in NYC for free time and lunch on own.

Matinee performance of Six at the Brooks Atkinson Theatre

Every Starr trip includes deluxe motorcoach transportation.
Six
From Tudor Queens to Pop Princesses, the SIX wives of Henry VIII take the mic to remix five hundred years of historical heartbreak into an exuberant celebration of 21st century girl power! SIX is the global sensation that everyone is losing their heads over. The New York Times says SIX is "pure entertainment!" and Evening Standard hails SIX as "the most uplifting new British musical I have ever had the privilege to watch."

Brooks Atkinson Theatre
This theater does not have elevators or escalators.
Theater is not completely wheelchair accessible. There are no steps to the designated wheelchair seating locations.
Headsets for sound augmentation and personal induction loop devices are available at the theater, free of charge.

**Masks, Proof of Full Vaccination and Identification MAY BE Required**
For Current COVID-19 Information: https://www.starrtours.com/bus-tours-and-trips/broadway-trips/
Guests who do not comply with protocols will be denied entry or asked to leave the theatre.

Key to NYC Vaccination- Requirements for Indoor Activities:
NYC has discontinued the Key to NYC vaccination requirement as of March 7. Businesses can still choose to require proof of vaccination. Policies are subject to change. For updated info, please visit:
https://www1.nyc.gov/site/doh/covid/covid-19-vaccines-keytonyc.page

-Brooks Atkinson Theatre
This theater does not have elevators or escalators.
Theater is not completely wheelchair accessible. There are no steps to the designated wheelchair seating locations.
Headsets for sound augmentation and personal induction loop devices are available at the theater, free of charge.