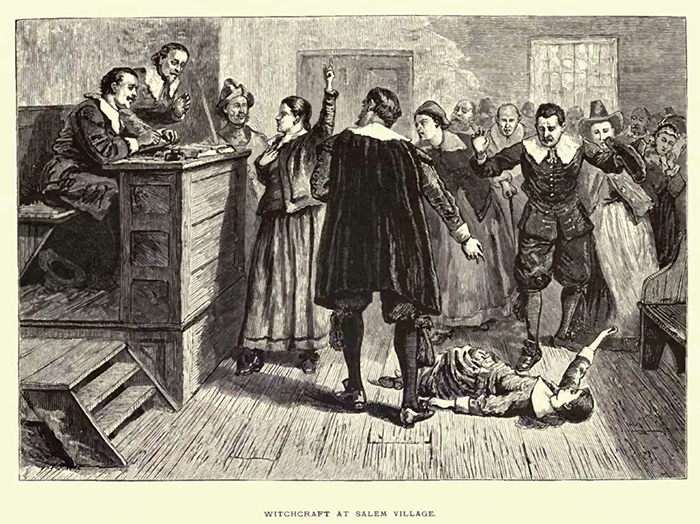 Witches may be popular costumes for Halloween now, but dressing (or acting) as one back in the late 1600s could have been even more of a “spooky” sight in Salem, Massachusetts. Between 1692 and 1693, the Salem witch trials marked a time of paranoia and fear in colonial Massachusetts. More than two hundred individuals were accused of practicing witchcraft (even if they weren’t in costume) and twenty of them were executed for these accusations.

The Puritans, being of strong Christian beliefs, believed in the power of the supernatural and were astonished when some of their kin began to show signs of the devil’s work. In early 1692, 9-year-old Elizabeth Parris and 11-year-old Abigail Williams “began having fits, including violent contortions and uncontrollable outbursts of screaming.” Diagnosed as bewitchment, it was soon noticed that other local girls started to show similar symptoms. So when a group of young girls in Salem Village, Massachusetts “claimed to be possessed by the devil and accused several local women of witchcraft,” fear rose among the Puritans, bringing to question nearly any act that appeared out of the norm. It is believed that some even used this as an opportunity to falsely accuse their enemies.

These accusations were brought to trial where the “witches” were met with severe consequences. Many of the accused were sent to prison for several months, which they surely preferred over being put to death. Bridget Bishop was the first to be hanged and eighteen others followed after her. The twentieth person killed was stoned since he refused to submit to a trial. Eventually, the Massachusetts General Court admitted their wrongdoings and made immediate apologies to the families of the victims. Even with this correction though, bitterness remained present in the community and the story lives on today.

“When push came to shove, the Salem witch trials were less about witchcraft and more about the state of Christianity. People were being sentenced to death because of heresy, which meant that they were showing an outward denial of the demanded Christian beliefs of the time. It was a crime so heinous that colonial law allowed all other laws to be superseded to deal with the threat. In modern terms, Salem declared martial law to deal with religious heresy.” (Asia-Pacific Economics Blog, 2015)

Salem, Massachusetts looks a whole lot different now than it did in the late 1600s, but much of the village has kept its eerie history. Visiting Salem can take you on tours of Salem’s history, from the Witch Museum to the graveyard where witchcraft trial judge John Hawthorne is buried, or to Pioneer Village with fascinating insight into the lives of the Puritans. Don’t just read about the past – go and explore it in Salem!

Starr has departures for Salem in October 2017 and Salem is featured on our Gloucester Whale Watch tour.

Our featured image is “Witchcraft at Salem Village” illustrated by F.O.C. Darley, William L. Shepard, or Granville Perkins, as appears on page 453 of “Pioneers in the Settlement of America: From Florida 1510 to California in 1849” Vol. 1, by William A. Crafts, Samuel Walker & C
Both images are engravings from the Public Domain.